Welcome to the GeoSciMLswg web

At OGC made commitment to draft documentation for GeoSciML V3, abstract specification. This will be abstract model for v4, which will be XML implementation of v3 model. Therefore transformation from v3 to v4 should be possible. Question as to relation of GeoscimL portrayal; this will have to be determined. Portrayal hopefully will be considered an implementation of the conceptual model, and the Level0-level1 etc will be more complete implementation of the conceptual model. v3 UML has XML artifacts that we might remove Bruce -- based on on experience with water quality model. Conformance class is defined by passing a schematron class. WaterML-- has section on UML to XML; this is the abstract model (section 9), section on implementation of XML instance (section 10). The GeoSciML 3 abstract model will follow pattern of WaterML section 9. GeoSciML v4 implementation model will follow pattern of section 10 Long discussion trying to figure out relationship between OGC modular specification for abstract model and OGC modular specification for XML implementation of that model. Question is does the packaging in the implementation specification have to mimic the abstract spec packaging. We concluded that the XML implementation packaging can be different from the abstract specificaiton packaging. Will write implementation spec for GeoSciML v4 against CGI GeoSciML v3 abstract model as an informal framework. But try to stay true to the v3 conceptual model wherever possible. GeoSciML portrayal is a different Specification that GeoSciMLv4. There is no way to define a core conformance class that will unify the GSML4 classes with the portrayal classes. Keep GeoSciML-Portrayal separate from GeoSciML v4. Start work on Core Requirements (see RequirementsDiscussion). A requirement that Categories are populated by URI that can dereference to SKOS or HTML is probably not a testable, useful requirement. Probably better as a recommendation, or optional conformance class. (but conformance classes can't be optional.) Tim suggested that there should be a requirement that v4 XML uses same class and attribute names as GeoSciML v3, wherever possible. Agreed. Bruce suggested that some attributes names are not unique in GeoSciML v3 (eg, various "role" attributes) and that they should be unique to conform to OGC modelling rules. Agreed - need to identify all of these and change them where required.

Portrayal Identifier is not considered a foreign key that should join a portrayal feature with a GeoSciMLv4 MappedFeature on a 1:1 basis. ACTION: Decision to include site observation and specimen portrayal classes, after broader discussion about role of portrayal services in GeoSciML. This direction is suggesting a pattern in which each important feature type has a portrayal feature class.

INSPIRE conformance issues for 3.1. Request from INSPIRE/Robert Tomas -- we reviewed table of mapping of GeoSciML elements to Inspire requirements to check that INSPIRE elements are catered for where appropriate. Issue-- CollectionType is a property required by Inspire, not present in GeoSciML. Agreed to add one attribute to the Collection package - collectionType - to satisfy INSPIRE needs. In process of evaluating proposal, discovered that the 3.0 collection.xsd imports 3.0 schema, so can't actually implement a collection of v3.1 items. ACTION: fix imports in collection.xsd to import v.3.1 instead of v3.0; add collectionType property that is of type collectionTypeTerm. This will be schema version 3.1.0 ThemeClassificationValue-- for classifying maps... Is property on GeologicFeature. Maps clearly to classifier on GeologicFeature for beginLifespan and endLifespan use MD_Metadata//citation//date//dataTypeCodes (use 19115-1 codelist and don't even have to add anything, see 19115-1 in drafts in HollowWorld/TC211/drafts package)

Proposal to make specification association from MappedFeature point to gml:GF_Feature. This would allow use of mapped feature by other related models. GFI_Feature from O&M or gml:AbstractFeature. GFI_Feature is apparently a sibling of AbstractFeature; observation doesn't derive from GFI_Feature, but it is stereotyped <<FeatureType>>, and GFI_Feature is as well, so AbstractFeature seems more general. Intention is that a mappedFeature is something that has an extent (it can be mapped). make MappedFeature specification an AbstractFeature. OK, now to the actual model specificaiton for v4. see the RequirementsDiscussion page, start at GeologicUnit description. Long discussion about philosophy of v4 -- should it attempt to implement simpler conformance classes against some actual set of imagined user scenarios, or to meet INSPIRE requrements classes. Or should we take the quicker path to OGC spec and use the UML model packaging as the conformance classes for the modular specification and use v3.1 pretty much out of the box.

Need to add older and younger geochron age terms in geologic event Move GeologicUnitDescription to geologicUnit extension package swe:QuantityRange has value as a pair of values; this can not be queried using OGC Filter. Discuss how to solve; whether to try WFS SWG change request. ACTION: Eric to email Alex Robin from the SWE working group to see if they have a plan for queryability of swe:QuantityRange. If not, then add upper value and lower value attributes to the model so that we can query proportion properties. GeologicUnitPart is the same CompositionPart gets lithology:LithologyTerm property; need condition that RockMaterial:lithology:LithologyTerm is only used if not in context of Geolgoic Unit. ACTION: adopt NaturalGeomorphologicFeatureView ; allows for point, line or polygon feature. Carlo Cippoloni and Mike Craig to propose a class & attribute structure Need a geologic unit extension package Need a physical properties extension package ACTION: Need to continue development work via future teleconferences. Ollie to co-ordinate. 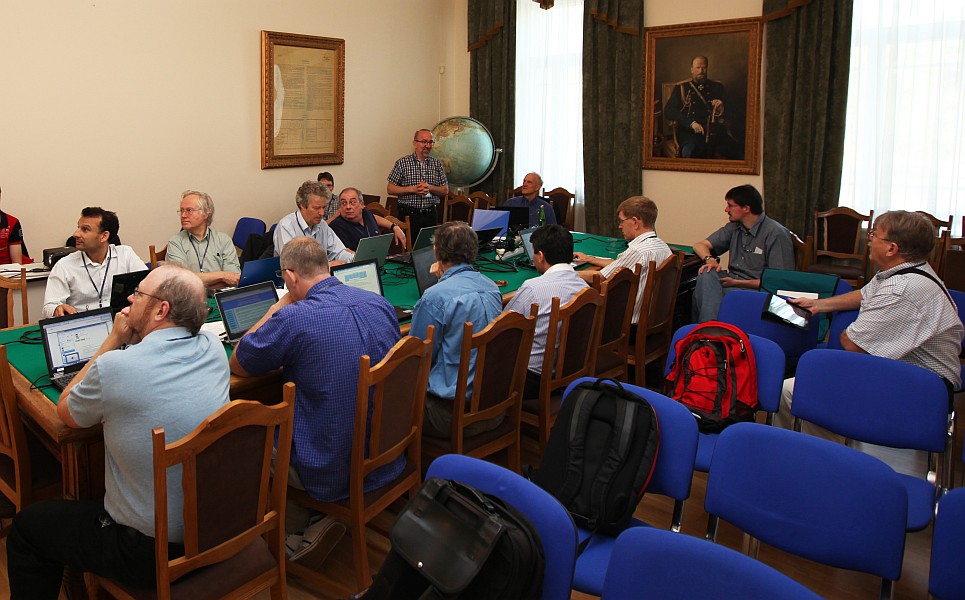